Redistribution and use in source and binary forms, with or without modification, are permitted provided that the following conditions are met:

THIS DOCUMENT IS PROVIDED BY THE COPYRIGHT HOLDERS AND CONTRIBUTORS "AS IS", AND ANY EXPRESS OR IMPLIED WARRANTIES, INCLUDING, BUT NOT LIMITED TO, THE IMPLIED WARRANTIES OF MERCHANTABILITY AND FITNESS FOR A PARTICULAR PURPOSE ARE DISCLAIMED. IN NO EVENT SHALL THE COPYRIGHT HOLDER OR CONTRIBUTORS BE LIABLE FOR ANY DIRECT, INDIRECT, INCIDENTAL, SPECIAL, EXEMPLARY OR CONSEQUENTIAL DAMAGES (INCLUDING, BUT NOT LIMITED TO, PROCUREMENT OF SUBSTITUTE GOODS OR SERVICES; LOSS OF USE, DATA OR PROFITS; OR BUSINESS INTERRUPTION) HOWEVER CAUSED AND ON ANY THEORY OF LIABILITY, WHETHER IN CONTRACT, STRICT LIABILITY OR TORT (INCLUDING NEGLIGENCE OR OTHERWISE) ARISING IN ANY WAY OUT OF THE USE OF THIS SOFTWARE, EVEN IF ADVISED OF THE POSSIBILITY OF SUCH DAMAGE.

This document and its content are intended for information purposes only and may be subject to change or update without notice.

This document may include preliminary concepts that may or may not be in the process of being developed by the Tari community. The release of this document is intended solely for review and discussion by the community of the technological merits of the potential system outlined herein.

The aim of this Request for Comment (RFC) is to describe the high-level Base Node architecture.

The Base Node architecture is designed to be modular, robust and performant. 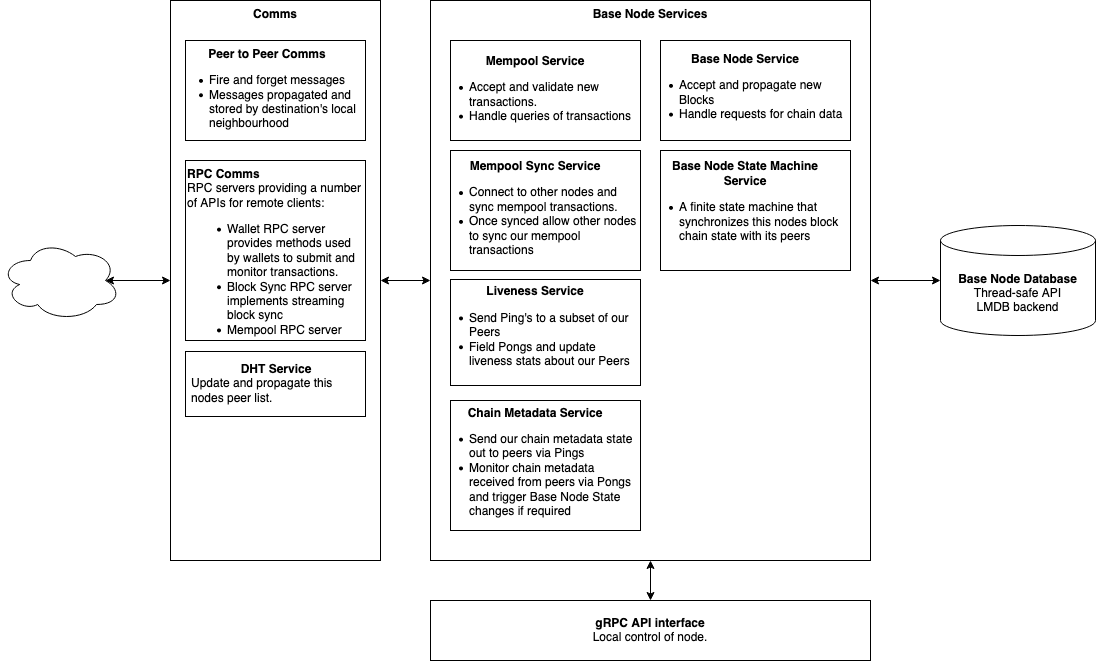 The major components are separated into separate modules. Each module exposes a public Application Programming Interface (API), which communicates with other modules using asynchronous messages via futures.

The Base Node Service fields requests for the local nodes chain state and also accepts newly mined blocks that are propagating across the network. The service subscribes to NewBlock and BaseNodeRequest messages via the P2P comms interface. These messages are propagated across the P2P network and can also be received directly from other nodes. The service also provides a local interface to its functionality via an asynchronous Request-Response API.

The P2P message types this service subscribes to are:

This service does not provide a local API but does provide an event stream and Status Info watch channel for other modules to subscribe to.

The mempool service tracks valid transactions that the node knows about, but that have not yet been included in a block. The mempool is ephemeral and non-consensus critical, and as such may be a memory-only data structure. Maintaining a large mempool is far more important for Base Nodes serving miners than those serving wallets. The mempool structure itself is a set of hash maps as described in RFC-0190

When the node reboots the Mempool sync service will contact peers and sync valid mempool transactions from them. After it has synced this service runs to field such requests from other peers.

The Mempool service handles Mempool Service Requests which it can receive from the P2P comms stack via its subscriptions, via the Mempool RPC service and via an internal Request-Response API. All these interfaces provide the following calls:

The Liveness service can be used by other modules to test the liveness of a specific peer and also periodically tests a set of its connected peers for liveness. This service subscribes to Ping P2P messages and responds with Pongs. The service gathers data about the monitored peer's liveness such as its latency. The Ping and Pong` messages also contain a copy of this nodes current Chain Metadata for use by the receiving nodes Chain Metadata Service.

Peer discovery is a key service that blockchain nodes provide so that the peer mesh network can be navigated by the full nodes making up the network.

In Tari, the peer-to-peer network is not only used by full nodes (Base Nodes), but also by Validator Nodes, and

For this reason, peer management is handled internally by the Comms layer. If a Base Node wants to propagate a message, new block or transaction, for example, it simply selects a BROADCAST strategy for the message and the Comms layer will do the rest.

When a node wishes to query a peer for its peer list, this request will be handled by the DHTService. It will communicate with its Comms module's Peer Manager, and provide that information to the peer.

The blockchain database module is responsible for providing a persistent storage solution for blockchain state data. This module is used by the Base Node Service, Base Node State Machine, Mempool Service and the RPC servers. For Tari, this is delivered using the Lightning Memory-mapped Database (LMDB). LMDB is highly performant, intelligent and straightforward to use. An LMDB is essentially treated as a hash map data structure that transparently handles memory caching, disk Input/Output (I/O) and multi-threaded access. This module is shared by many services and so must be thread-safe.

The Tari Peer to Peer messaging protocol is defined in RFC-0172. It is a fire-and-forget style protocol. Messages can be sent directly to a known peer, sent indirectly to an offline or unknown peer and broadcast to a set of peers. When a message is sent to specific peer it is propagated to the peers local neighbourhood and stored by those peers until it comes online to receive the message. Messages that are broadcast will be propagated around the network until the whole network has received them, they are not stored.

Fire-and-forget messaging is not efficient for point to point communications between online peers. For these applications the Base Node provides RPC services that present an API for clients to interact with. These RPC services provide a Request-Response interface defined by Profobuf for clients to use. RPC also allows for streaming of data which is much more efficient when transferring large amounts of data.

Examples of RPC services running in Base Node are:

gRPC access is useful for tools such as local User Interfaces (UIs) to a running Base Node; client wallets running on the same machine as the Base Node that want a more direct communication interface to the node than the P2P network provides; third-party applications such as block explorers; and, of course, miners.

A non-exhaustive list of methods the base node module API will expose includes: